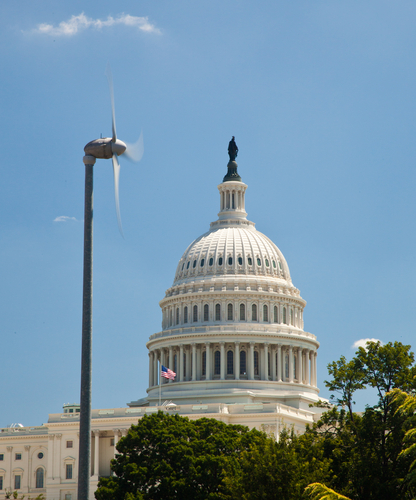 U.S. Senate Majority Leader Chuck Schumer (D-NY) and U.S. Sen. Joe Manchin (D-WV) on Wednesday proposed the bipartisan Inflation Reduction Act of 2022, which would provide $369 billion for climate and clean energy provisions, and reduce the country’s carbon emissions by roughly 40 percent by 2030, according to a bill summary released by the lawmakers.

“We will improve our energy security and tackle the climate crisis by providing tax credits and investments for energy projects,” Biden said in a statement issued last night. “This will create thousands of new jobs and help lower energy costs in the future.”

The massive 725-page proposal also would invest hundreds of billions of dollars in healthcare, prescription drug, and tax policies.

“This is the action the American people have been waiting for,” Biden said. “This addresses the problems of today — high healthcare costs and overall inflation — as well as investments in our energy security for the future.”

Schumer tweeted last night that the bill will be the greatest pro-climate legislation ever passed by Congress. “It fights the climate crisis with the urgency the situation demands…, all while creating new good-paying jobs,” he tweeted.

The unexpected reconciliation announcement on Wednesday came less than two weeks after Manchin, who holds the swing vote in the 50-50 Senate, ended negotiations on climate provisions until he could get more details on the nation’s inflation data for July.

“We must be honest about the economic reality America now faces if we want to avoid fanning the flames of inflation,” he reiterated in a statement last night. “At its core, the purpose of reconciliation is to get our economic and financial house in order. Contrary to foolish talk otherwise, America cannot spend its way out of debt or out of inflation.”

Manchin also said that he worked diligently to get input from all sides on the bill now proposed by his Democratic colleagues that removes inflationary policies. Based on that work, he said he will now vote for the Inflation Reduction Act of 2022.

“Rather than risking more inflation with trillions in new spending, this bill will cut the inflation taxes Americans are paying, lower the cost of health insurance and prescription drugs, and ensure our country invests in the energy security and climate change solutions we need to remain a global superpower through innovation rather than elimination,” Manchin said.

“In what would amount to the most ambitious climate bill ever enacted, “this legislation would… unleash the potential of the American clean energy industry, and create good-paying jobs across the country,” said Carper in a statement issued Wednesday. “The Inflation Reduction Act is an answer to our prayers for a better future for our planet.”

If enacted, according to the bill summary, the Inflation Reduction Act of 2022 would provide investments for domestic manufacturing. For example, the bill includes over $60 billion for on-shore clean energy manufacturing in the United States across the full supply chain of clean energy and transportation technologies.

“It is a huge relief to see Congress is finally rising to meet the climate challenge,” said Gregory Wetstone, president and CEO of the American Council on Renewable Energy. “Legislation that finally moves the country beyond years of on-again, off-again renewable tax credits and establishes a long-term, full-value clean energy tax platform will help provide renewable companies with the stability they need to do business.”

“With long-term incentives for clean energy deployment and manufacturing, the solar and storage industry is ready to create hundreds of thousands of new jobs and get to work building out the next era of American energy leadership,” Solar Energy Industries Association President and CEO Abigail Ross Hopper said in a statement. “This is a crucial window of opportunity that we cannot miss, and now Congress must seal the deal and pass this legislation.”

There are also decarbonization-related provisions in the bill. This includes tax credits for clean sources of electricity and energy storage and roughly $30 billion in targeted grant and loan programs for states and electric utilities to accelerate the transition to clean electricity; a $27 billion clean energy technology accelerator to support the deployment of technologies to reduce emissions, especially in disadvantaged communities; and over $9 billion for federal procurement of American-made clean technologies to create a stable market for clean products, including $3 billion for the U.S. Postal Service to purchase zero-emission vehicles, according to the summary.

Manchin also said the proposed bill would ensure that the market takes the lead in the nation’s ongoing energy transition.

“The Inflation Reduction Act of 2022 invests in the technologies needed for all fuel types – from hydrogen, nuclear, renewables, fossil fuels, and energy storage – to be produced and used in the cleanest way possible,” said the senator. “It is truly all-of-the-above, which means this bill does not arbitrarily shut off our abundant fossil fuels.”

Instead, Manchin said, it invests heavily in technologies to help America reduce its domestic methane and carbon emissions while helping to decarbonize around the world as dirtier products are displaced.

The bill also authorizes more than $20 billion to support climate-smart agriculture practices; $5 billion in grants to support healthy, fire-resilient forests, forest conservation, and urban tree planting; and tax credits and grants for the domestic production of biofuels and to build the infrastructure needed for sustainable aviation fuel and other biofuels.

Among numerous other provisions, the bill includes over $60 billion in environmental justice priorities to drive investments into disadvantaged communities, and $9 billion in consumer home energy rebate programs, focused on low-income consumers, to electrify home appliances and for energy efficient retrofits, the summary says.

While supporting such provisions, this is not the bill that the Natural Resources Defense Council (NRDC) would have written, according to NRDC President and CEO Manish Bapna, “but it is a package we can’t afford to reject.”

“It’s time to break, not deepen, our dependence on fossil fuels and all the damage and danger they bring,” Bapna said. “There’s urgent work ahead to ensure a just and climate-safe future. This bill is a giant step forward. Congress must pass it without delay.”

President Biden urged both houses of Congress to swiftly approve the measure and get it to him for his signature to make it law.